By signing up, you agree to our Terms Of Use.
CHECK MAIL NOW

Your email address has not been verified. Please click below to complete your registration.

Already have an account?Sign in to Sixth Tone

Please confirm your email address by clicking the link in the email received from us.

Don’t worry! Just fill in your email and we will help you reset your password.

The Chinese internet is buzzing with young people discussing their intentions to prepare their last wills and testaments after popular esports player Yu Jingxi — also known as Misaya — wrote his own will on a reality show that aired over the weekend.

As of 2018, nearly 150,000 people had registered their wills with the nonprofit China Will Registration Center, of which 178 were, like the 27-year-old Yu, from the so-called post-’90s generation, Beijing Youth Daily reported Thursday. Nearly all of these young people named their parents as property heirs, and most of the young testators are reportedly white-collar workers and entrepreneurs with relatively stable careers and incomes. None of the 178 wills have taken effect yet.

Talking about death is taboo in China, and few people write their own wills because even acknowledging the eventuality of death is considered unlucky. Although drafting wills is still relatively uncommon in the country, more and more people are breaking from tradition and becoming open to writing their final testaments.

On microblogging platform Weibo, a related hashtag had been viewed over 180 million times by Thursday afternoon. While some netizens have suggested that Yu is too young to write a will, others have voiced support for his decision. “Life is full of unpredictability,” commented one user. “We shouldn’t avoid a will just because we are afraid of the word ‘death’.” (Image: @湖南卫视我家小两口 on Weibo) 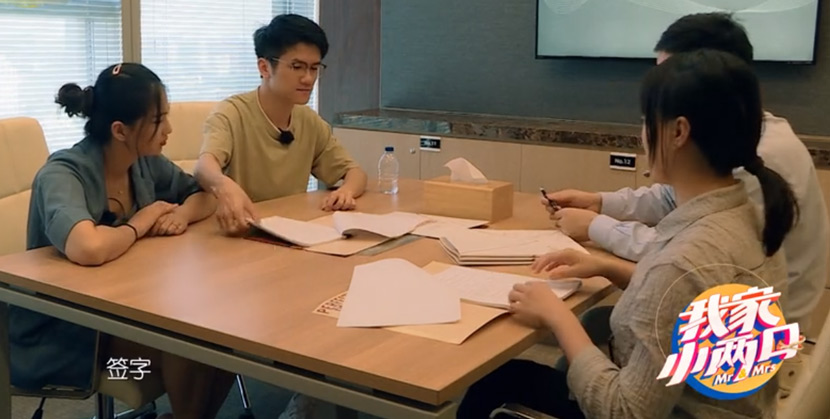 According to Chinese media reports, Fang’s grandson had condemned Jinri Toutiao last month after coming across information that allegedly defamed their renowned ancestor while using the platform’s search engine. Jinri Toutiao in August launched the in-app search function, which returns results from apps under its parent company, ByteDance, as well as from the wider Chinese internet.

Regulators have demonstrated an urgent need to protect the reputations of the country’s martyrs. A new national law protecting “heroes and martyrs” came into effect last May, which stipulates that defaming or denying the deeds of China’s revolutionary heroes could potentially be a criminal offense. (Image: VCG) 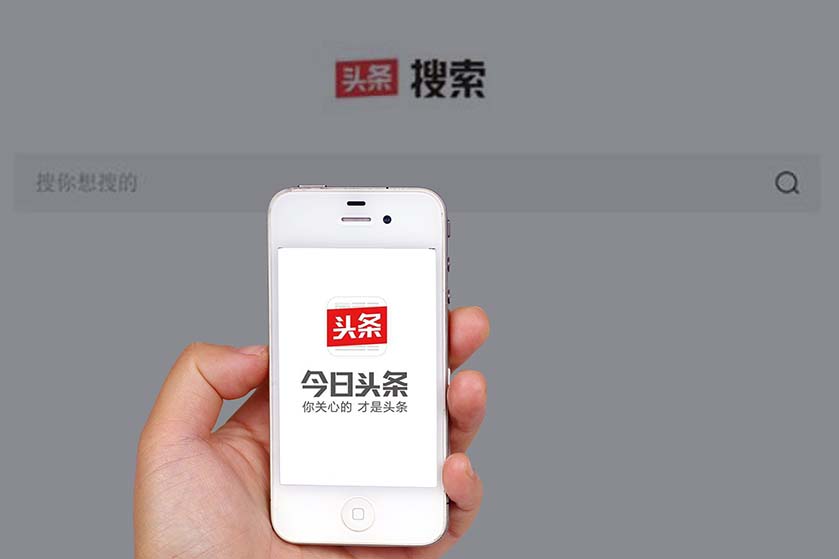 Fifty-one children and three teachers at a kindergarten in southwestern China’s Yunnan province were hospitalized Monday after a man entered school grounds and sprayed a corrosive liquid on them, according to local authorities.

The 23-year-old man, surnamed Kong, broke into Dongcheng Kindergarten on Monday and sprayed sodium hydroxide onto some of the students and teachers, the local government in Kaiyuan, a county-level city in Yunnan, said in a statement. None of the injuries are believed to be life-threatening.

The public security bureau apprehended the man immediately after the incident, the statement said. Police determined that the man had “sought revenge against society” and purchased the sodium hydroxide online. An investigation is ongoing. (Image: From 进源印象 on Tecent Video) 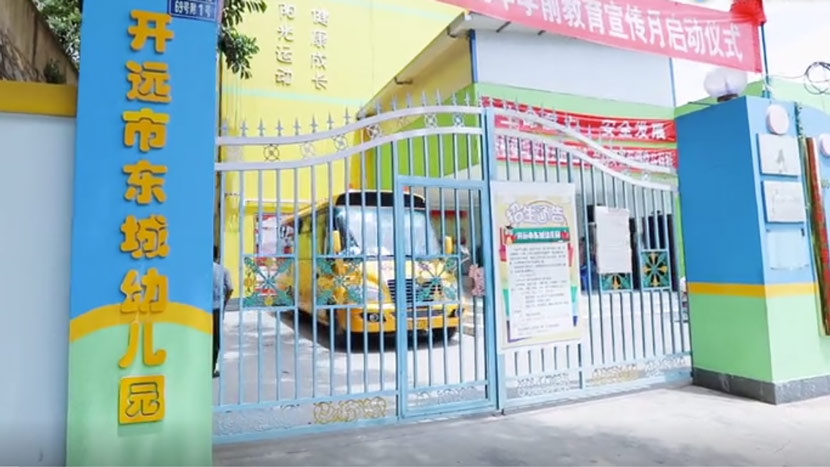 First-year students at a high school in central China’s Hubei province were given a peculiar assignment prior to Monday’s online shopping bonanza: use their math skills to build models that could help their mothers save more money.

The students at Wisco No. 3 High School in Wuhan were asked to use various mathematical modules — tree diagrams, tabular methods, and abstract formulas — to finish the “Singles’ Day Shopping Advice for Mom” part of their assignment, Wuhan Evening News reported. Students quoted in the article said they helped their mothers save on a range of products including chocolates, dresses, handbags, and scarves.

Singles’ Day, which was started by tech giant Alibaba on Nov. 11, 2009, has turned into the world’s biggest shopping extravaganza, breaking sales records and spurring consumers to grapple with ways to find new discounts annually. This year, Chinese consumers spent over 10 billion yuan ($1.43 billion) in just the first 96 seconds after the deals went live at midnight. (Image: VCG) 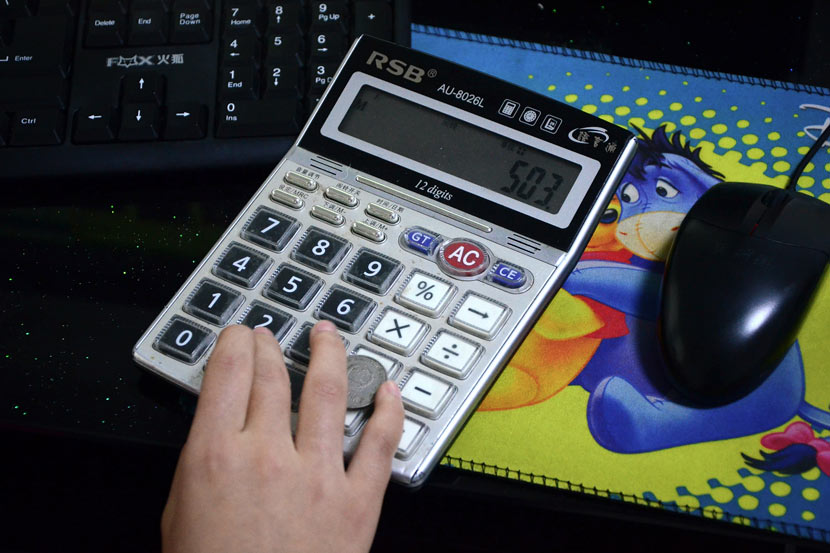 A hospital in Daqing, a city in northeastern China’s Heilongjiang province, has been accused of contributing to a pregnant woman’s death after refusing to admit her due to lack of space. The local health commission announced the results of its preliminary investigation Sunday, suspending relevant medical staff, The Beijing News reported.

The deceased woman’s husband, surnamed Yan, wrote Wednesday in a since-deleted post on microblogging platform Weibo that the obstetrics department at Daqing Oilfield General Hospital refused to admit his wife — a pregnant 39-year-old surnamed Liu — because no beds were available. Although the hospital later admitted Liu, she died Tuesday, six days after giving birth. Yan has accused the hospital of neglect and misconduct leading to his wife’s death and demanded that local authorities investigate the case.

Daqing’s health and family planning commission announced the results of its preliminary investigation Sunday, determining that the couple were directed to another hospital some 20 minutes’ drive away but instead went home. Daqing Oilfield General Hospital later called Liu and Yan after a bed became available, the investigation said, adding that the patient was attentively cared for once she had checked in.

The medical staff involved — the commission did not say how many — have been suspended while the investigation awaits Liu’s autopsy, according to the report. The infant is alive and under close watch at the hospital. (Image: VCG) 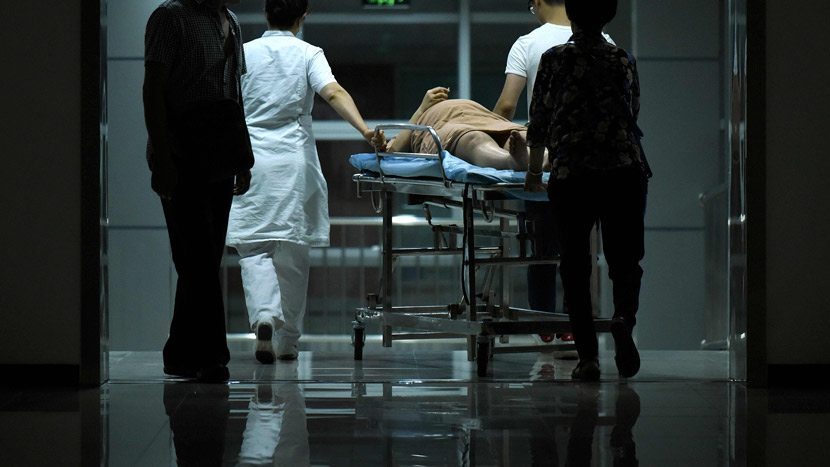 Shanghai Free Trade Zone implemented a new filing system for imported non-special purpose cosmetics last November, which reduced the amount of time required to process product approvals from three months to just five working days. The change contributed to a spike in cosmetics imports to China during the first three quarters of 2019, with imports rising 47.1% year-over-year to 22.1 billion yuan ($3.1 billion), according to Shanghai customs data.

At the China International Import Expo in Shanghai this week, L’Oréal exhibited its Urban Decay and NYX Professional Makeup product lines, which the company hopes to launch in the Chinese market in the near future. The products are currently only available to Chinese consumers through cross-border e-commerce platforms. Over the past year, more than 1.6 million people in China have purchased NYX Professional Makeup products through these channels, according to the company.

“Young Chinese consumers not only spend a large amount, but are also very willing to buy high-end products,” Fabrice Megarbane, president of L’Oréal China, told The Paper on Saturday. “This phenomenon may not exist in other global markets.” (Image: VCG) 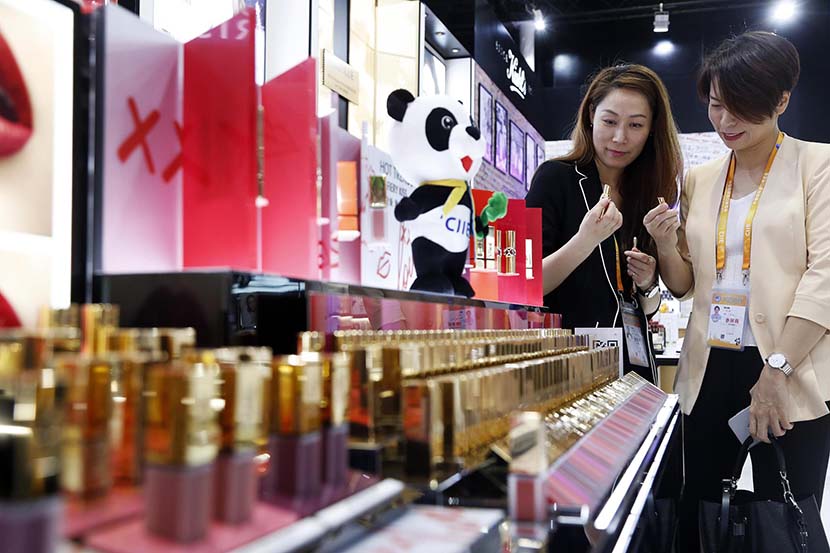 Shanghai has the highest incidence of Type 1 diabetes in China, according to a leading endocrinologist in the city.

“The average growth rate in the incidence of Type 1 diabetes among children aged 14 and below was 14.2 (percent) in a 15-year period,” Luo Feihong, a physician at Fudan University’s children’s hospital, told an audience at the ongoing China International Import Expo.

Compared with the more common Type 2 diabetes, which mostly affects the elderly and obese, Type 1 diabetes is more life-threatening, as the patients are essentially unable to produce insulin, the hormone that controls blood sugar levels. Due to a lack of awareness of the disease, many parents of young diabetics in China don’t know how to monitor or treat their children’s conditions, Luo said. 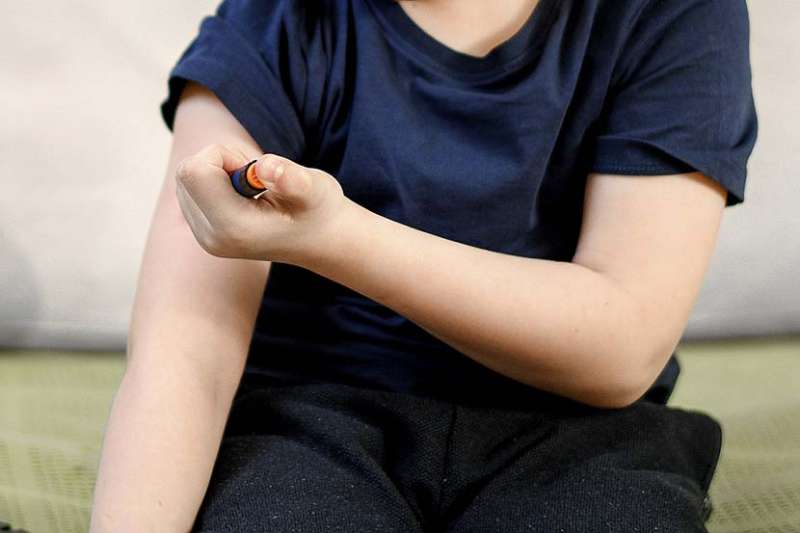 Impossible Foods is planning to work with China to build the world’s “most flexible, most guaranteed, and most sustainable food system” as a model for other countries, Sixth Tone’s sister publication The Paper reported Saturday.

Though the American artificial meat giant has yet to enter the Chinese mainland market, it met with a number of potential partners from the country during the China International Import Expo this week in Shanghai. Impossible Foods’ products can be found in several international markets, including 17,000 restaurants in the U.S. and Singapore.

Earlier this year, fast-food chain Burger King partnered with Impossible Foods to promote a meat-free Impossible Whopper in the U.S. The artificial meat company currently has no plans to extend its cooperation with Burger King to the Chinese market, according to The Paper.

China is the world’s largest consumer of meat. Since the first African swine fever outbreak was detected in the country over a year ago, domestic pork prices have surged by 47%. (Image: CNS/VCG) 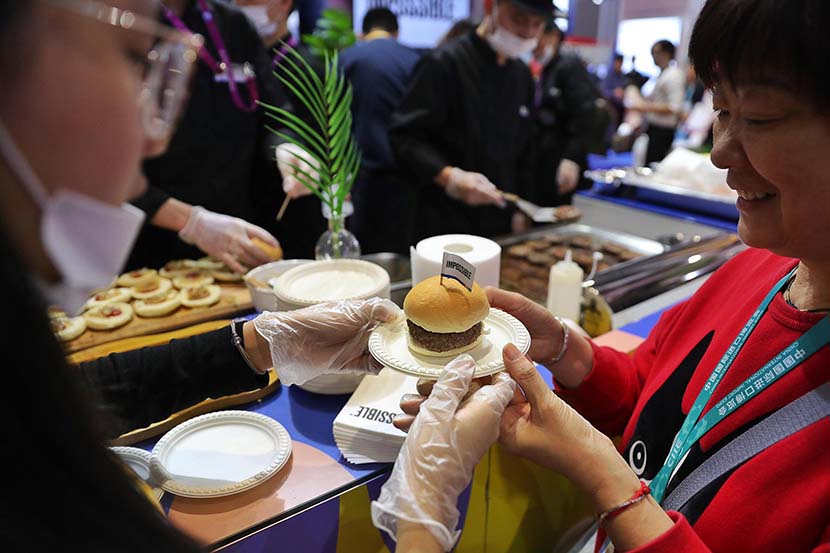 The Supreme People’s Court has rejected an appeal from an inmate seeking higher compensation after he contracted HIV while serving a prison sentence, The Beijing News reported Thursday.

Zhao Ronghui, who is paralyzed below the waist, has been serving a sentence for robbery and attempted murder since 2008 at Siping Prison in the northeastern Jilin province. He claims to have contracted the virus while staying in the prison’s hospital ward in 2011 from another HIV-positive inmate who came to his room to “chat, play chess, and help him use the toilet,” according to The Beijing News.

Zhao sued Siping Prison in 2012 and was offered 100,000 yuan ($14,300) in compensation, according to the news outlet. Unhappy with that amount, Zhao appealed to China’s Supreme Court, requesting 8 million yuan in damages.

The Supreme People’s Court ruled against Zhao’s appeal on Tuesday, saying his legal claim against the prison — “psychological damage” with “severe consequences” — did not justify such a high compensation claim. (Image: IC) 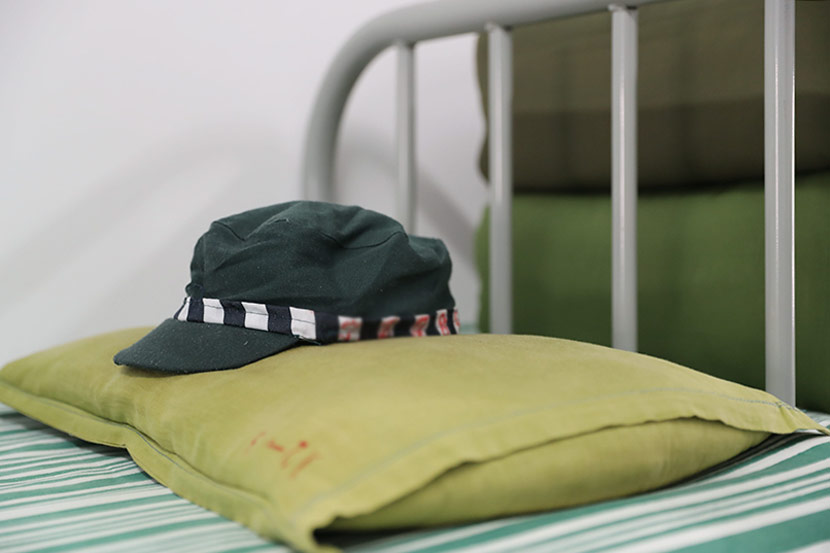 Video-streaming platform Bilibili has deleted the account of a user who called on his fans to exploit a fruit seller’s pricing mistake on e-commerce platform Tmall, which resulted in the store’s temporary closure, according to a statement Thursday.

During a livestream Wednesday, LurenA-, also known as Passerby A-, told his fans to barrage the Guoxiaoyun fruit store on Tmall with orders after the latter mistakenly priced 4.5 kilograms of oranges for 26 yuan ($4), Shanghai-based media outlet Guancha.cn reported Thursday. The seller was then immediately flooded with more than 20,000 orders worth some 7 million yuan.

Though the store apologized for the mistake and begged buyers to cancel their purchases, the Bilibili vlogger instructed his fans to report the store for false advertising, leading to its temporary closure. Tmall on Thursday said that it had “protected” the store shortly after noticing the influx of orders and promised to “minimize the losses of all parties to the best of our abilities.”

Tmall said it had compensated users who had filed complaints with a few hundred yuan each from a deposit the seller had paid to operate on the platform. The fruit vendor was back online Friday afternoon, but no products were listed for sale. (Image: The Paper) 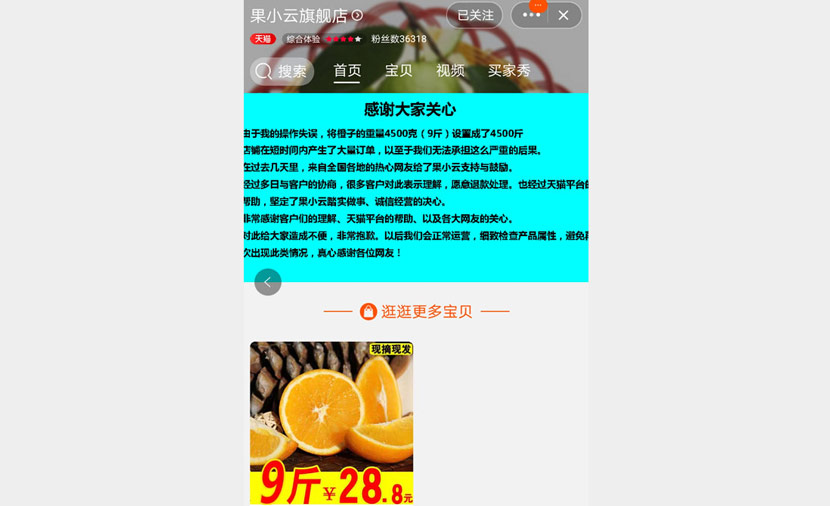 Chinese ride-hailing giant Didi Chuxing has scrapped a plan to introduce shorter service hours for female users of its carpooling platform after the new policy was slammed as sexist.

In a statement Thursday, Didi said that its Hitch carpooling service is now available for all passengers between 5 a.m. and 8 p.m. Previously, Hitch had only imposed the 8 p.m. limit for female riders, while men could use the service until 11 p.m.

On Wednesday, Didi announced it was relaunching the carpooling service in seven cities with a raft of overhauled safety measures, including the shorter service hours for women. The gender-based policy soon drew criticism from the public, with many accusing Didi of discriminating against female passengers. Legal experts, meanwhile, argued that the company was violating China’s consumer rights protection law.

Didi said it decided to reverse the policy after taking public opinion into consideration. The company’s president, Liu Qing, acknowledged the policy was “unfriendly” to female customers but added that Didi was “walking on thin ice when resuming the service.” Hitch was suspended in August of last year after two female passengers in Henan and Zhejiang provinces were killed by their drivers. (Image: VCG) 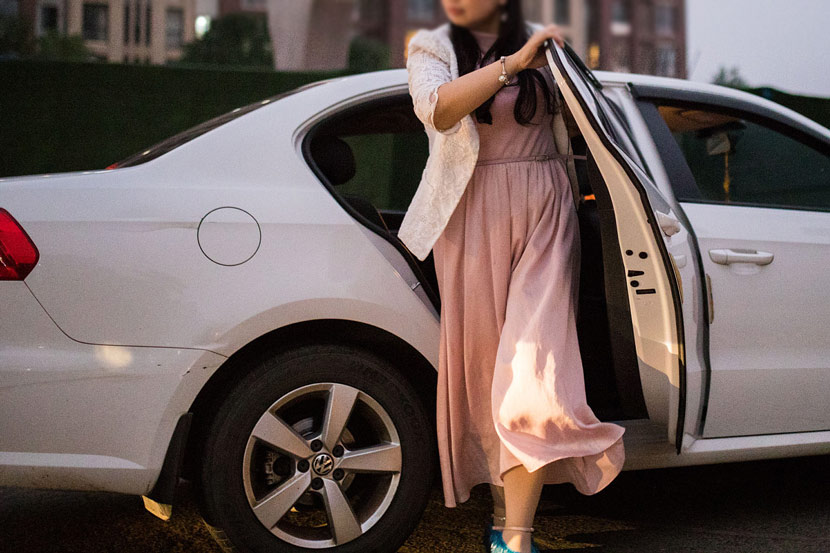