By signing up, you agree to our Terms Of Use.
CHECK MAIL NOW

Your email address has not been verified. Please click below to complete your registration.

Already have an account?Sign in to Sixth Tone

Please confirm your email address by clicking the link in the email received from us.

Don’t worry! Just fill in your email and we will help you reset your password.

Based on Ctrip’s current share price, the sale will generate around $1 billion, with Baidu expected to use the capital to cope with the current economic slowdown and increased competition in its core advertising business, Bloomberg analysts said. Ctrip confirmed the sale Friday to reporters with The Paper, Sixth Tone’s sister publication.

In 2015, Baidu acquired one-quarter of Ctrip through a share swap that required the search giant to drop its stake in Ctrip rival Qunar. As of the end of August, Baidu held 17.87% of Ctrip’s shares, according to The Paper. Even after the sale, Baidu will remain the travel site’s biggest shareholder.

Baidu has been diversifying its business in recent months amid economic uncertainty caused by increased government scrutiny of its advertising business and by the China-U.S. trade war. In August, Baidu and three other companies jointly invested $434 million in Zhihu, China’s Quora-like question-and-answer platform. (Image: VCG) 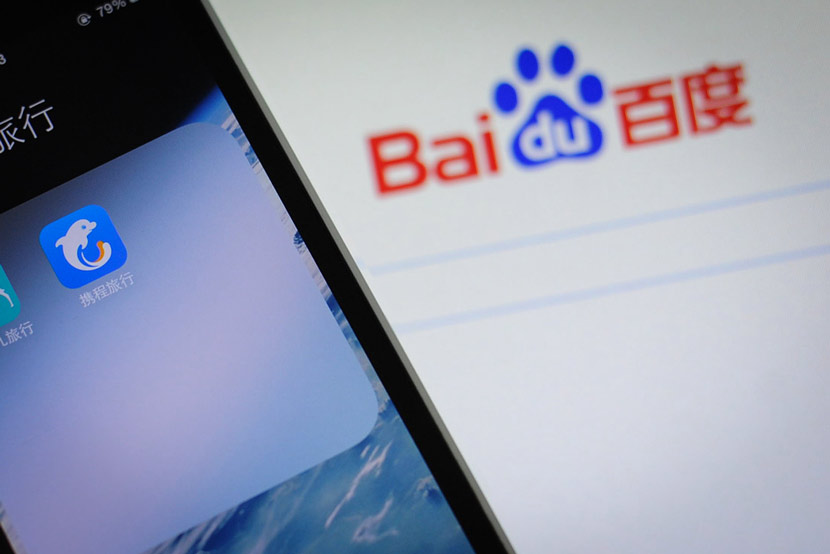 Earlier this month, a court in Shanghai’s Jiading District also issued a consumption ban on Wang after he neglected to pay over 3 million yuan in compensation to an employee who had sued his company over contractual disputes. The court imposed the ban after Wang failed to comply with a previous legal decision, but that prohibition was reportedly overturned earlier this week. (Image: VCG) 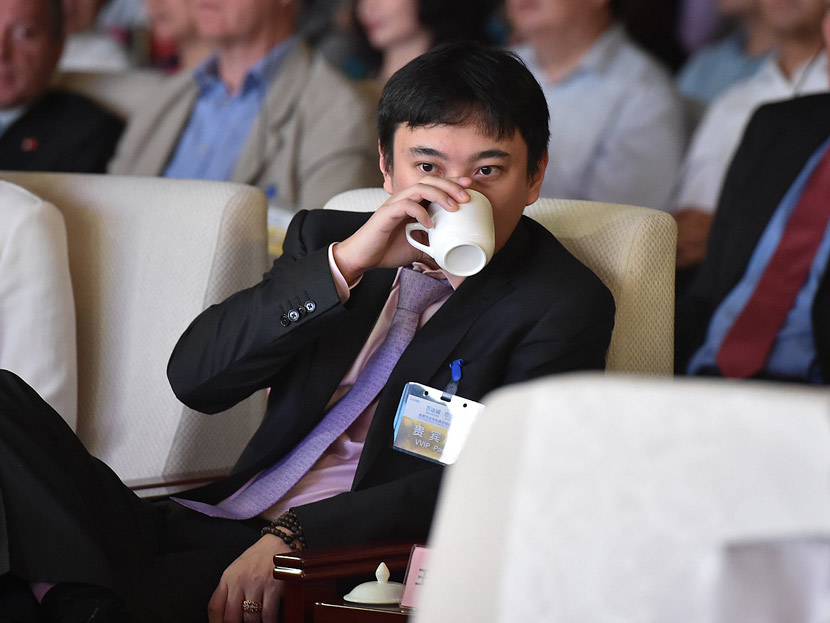 Malaysian authorities on Wednesday raided a financial fraud ring run by hundreds of Chinese nationals in Cyberjaya, a tech hub about a 40-minute drive south of Kuala Lumpur.

Following public complaints and months of extensive surveillance of a supposed call center in a six-story building, Malaysian authorities conducted what they’re describing as the largest raid of a Chinese scam syndicate to date. According to a post Thursday on a Facebook page called Malaysia Immigration News Update, the 150 immigration officials who raided the premises apprehended 680 Chinese nationals who failed to show proof of legal residency.

Circulated videos of the raid show dozens of people fleeing the buildings — and some even jumping out of windows — with immigration officers in hot pursuit. In a statement Thursday, Khairul Dzaimee Daud, director-general of Malaysia’s Immigration Department, estimated that “100 people have escaped the country.”

The investment scam syndicate is believed to have been operating for six months out of the Cyberjaya building, which was reportedly protected by guards stationed on each floor. Khairul said the scam offered “high and quick profits” to unsuspecting victims. “The operators sent a code to customers of a Mandarin-language website,” he said. “All transactions were done through WeChat Pay or banks in China.” (GIF: Facebook)

The announcement comes three weeks after China officially rolled out its commercial 5G services. Earlier this month, the country’s science and technology ministry also announced that it had formed two teams to oversee research on 6G, while Canadian media reported in August that Chinese telecom giant Huawei is working on developing 6G in its lab in Ottawa, Ontario.

Compared with current 5G networks, 6G will increase its download speeds to between 100Gbps and 1Tbps — almost 10 to 100 times faster than 5G — by increasing antennas and bandwidth. However, it’s still unclear how 6G technology will specifically be deployed and how it would change people’s lives.

“The commercial use of 5G has just started, and the world will probably have to wait 10 years until 6G gets a commercial rollout,” Xiang Jiying, chief scientist at telecom company ZTE, said Wednesday at an ongoing 5G conference in Beijing. “The current 6G exploration is still focused mostly on application demands and core technological requirements. Most of the discussions are still on a macro level and have yet to be specified.” (Image: Sixth Tone) 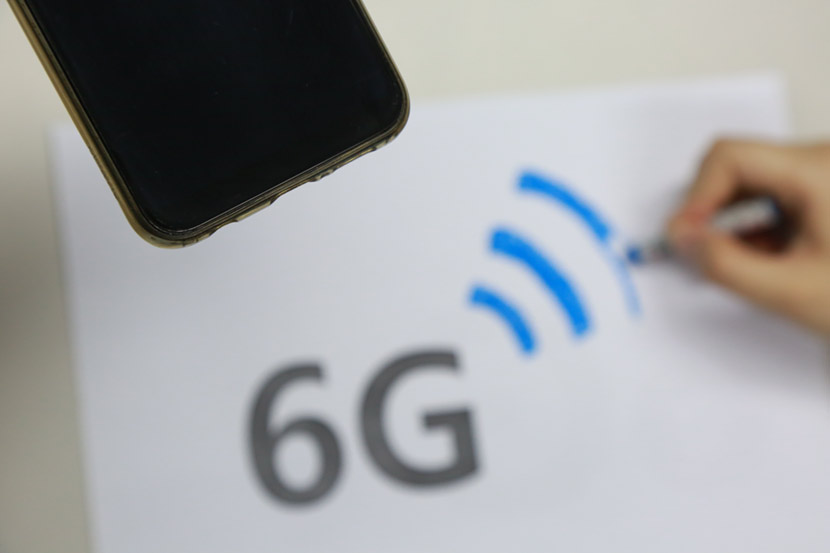 Earlier this week, people raised doubts over the controversial treatment after the company’s name appeared on a list of entities to be awarded local government subsidies for innovation and entrepreneurship, according to the media report.

The company has since suspended its operations, The Beijing News reported.

Bigu is a centuries-old tradition with roots in Taoism that includes fasting to cleanse the body of harmful toxins and heighten spiritual awareness — though many medical experts doubt its effectiveness. In 2017, a man in the southwestern city of Chengdu fainted while driving after fasting for five days, and in 2016, a 57-year-old woman with high blood sugar in central China died a day after beginning bigu as part of a treatment course. (Image: VCG) 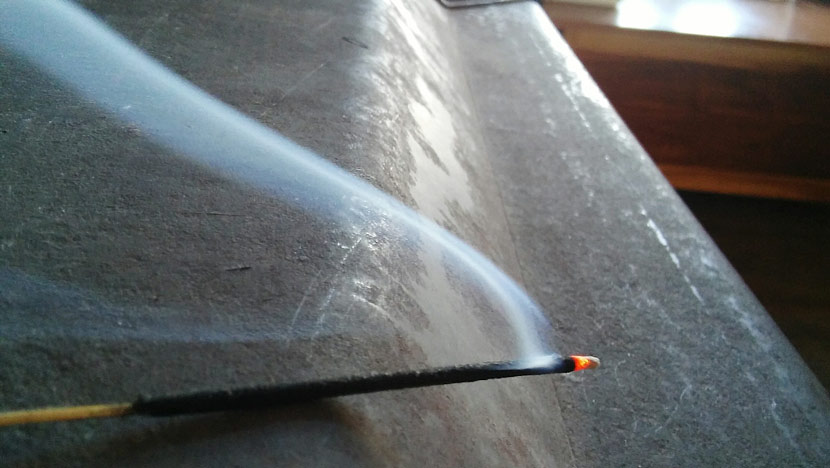 Police in the southern Guangdong province have arrested a 54-year-old man on suspicion of raping a 12-year-old girl with a developmental disability who had her second abortion this year after repeated sexual assaults.

According to an official statement Thursday, the man, surnamed Xie, has admitted to assaulting the girl, surnamed Liu. The man’s DNA also matched with the second aborted fetus, Sixth Tone’s sister publication The Paper reported.

Authorities confirmed to The Paper that police are continuing to investigate the multiple sexual assaults, one of which led to Liu’s first pregnancy in March. On Tuesday, Liu moved into a welfare center in the city of Maoming, where she will stay until construction on her family’s new home — provided through a government welfare initiative — is completed.

Another rape case involving an underage victim in China also made headlines this week. On Wednesday, police in the central Hunan province arrested six people over alleged multiple rapes of an 11-year-old girl at a karaoke club after her father’s public letters drew attention to the case on microblogging platform Weibo. (Image: VCG) 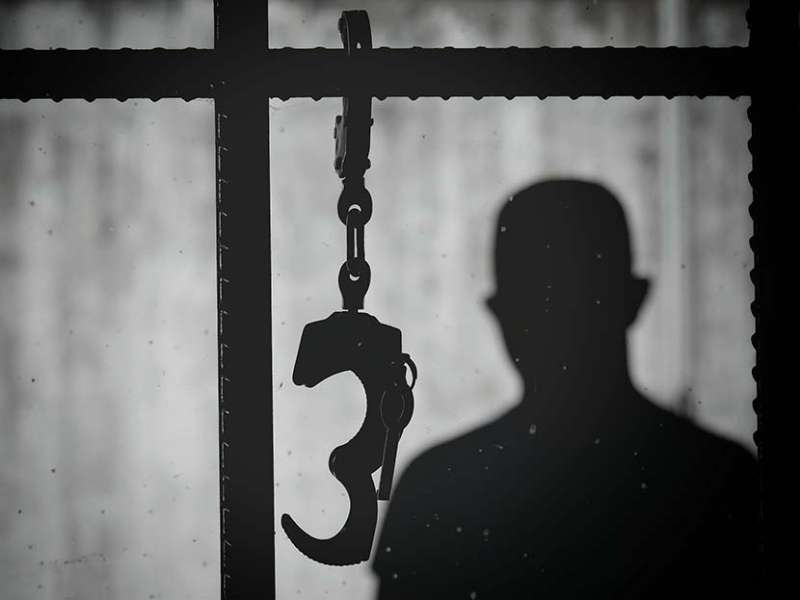 On a red-eye flight Tuesday from Guangzhou to New York, a doctor came to the aid of an elderly Chinese man who was unable to relieve himself and at risk of a ruptured bladder, reported Sixth Tone’s sister publication The Paper.

Six hours before the plane was due to land, Zhang Hong and Xiao Zhanxiang, both vascular surgeons at hospitals in China, had to think on their feet when a fellow passenger found himself unable to empty his very full bladder. Zhang and Xiao determined that the man was holding in about 1 liter of urine — more than twice the normal daytime capacity — that needed to be drained immediately.

Though the doctors only had access to a first-aid kit, they were able to fashion a makeshift catheter using straws and a tube from an oxygen mask. However, the difference in air pressure prevented the urine from flowing out freely. So Zhang took matters into his own mouth, sucking on the open end of the tube until over half a liter of urine was extracted.

“Actually, I felt like vomiting when I took the second mouthful, because it indeed smelled bad. At the same time, I was afraid of contracting diseases,” Zhang told The Paper in a separate interview, adding: “I don’t regret it one bit.” (Image: China Southern Airlines) 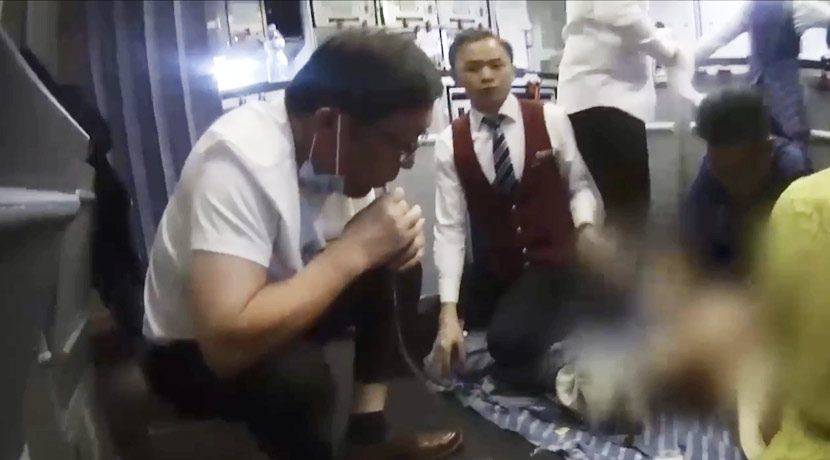 The suspect, surnamed Wen, was apprehended Nov. 4 at her seven-story home — which also served as a shipment hub — after police from Xixiangtang District in Nanning, the region’s capital, tracked her down through a series of arrests made since March. According to The Beijing News, Wen has a 20-year history of drug use and is paralyzed from the waist down — so she would enlist fellow users to work for her and in exchange continue to feed their habits. Police have detained 11 suspects in connection with the case and seized over 2 kilograms of crystal meth, the report said.

Under Chinese law, drug trafficking is punishable by life in prison or even death. In June of last year, a livestreamer in the eastern Shandong province was accused of running a drug-trafficking operation from his channel on an unnamed video-hosting platform. (Image: @广西政法 on Weibo)

Blood donors in China may soon be eligible for rewards under the country’s social credit system, the state-owned China News Service reported Tuesday.

In a joint notice Thursday from 11 central government departments, including the National Health Commission, authorities said they hoped to encourage blood donation and were considering including it in the national social credit system. Though the notice was not explicit about how blood donations would affect social credit, it suggested that donors could be rewarded with public honors as well as free or discounted access to public facilities, including tourist attractions.

The notice also vowed to raise awareness of blood donation through television programs and advertisements, among other means. The departments called on facilities to make blood donation safer by implementing quality-control mechanisms under the guidance of relevant health authorities.

According to the National Health Commission, blood donations in China have grown each year for the past two decades, with nearly 15 million individual donations in 2018. However, safety remains a pressing concern, as some communities — such as those in the rural hinterlands ravaged by HIV in the 1980s — struggle to dispel fears of contamination. (Image: VCG) 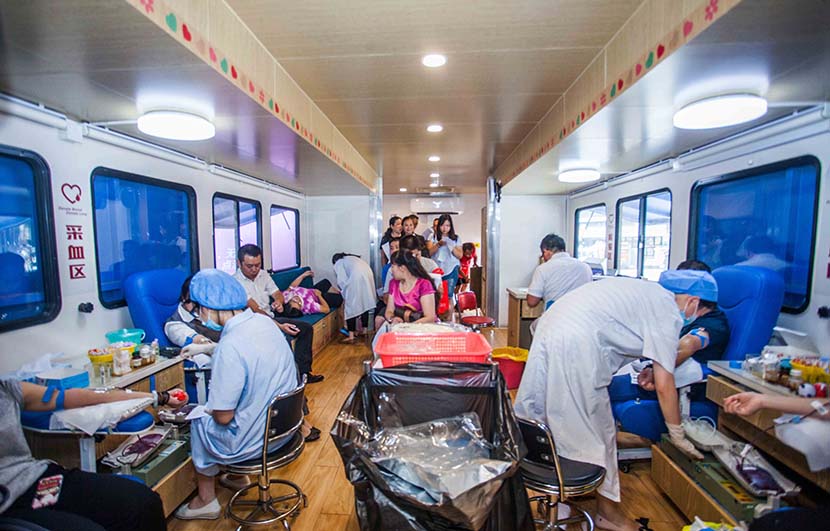 Police in China and the United Arab Emirates have detained dozens of suspects for their alleged involvement in an international criminal gang that made and sold an enormous volume of counterfeit luxury goods in the Middle East, Sixth Tone’s sister publication The Paper reported Sunday.

In a joint operation, police in Dubai, Shanghai, and Guangdong province detained 57 suspects in July, seizing more than 28,000 counterfeit handbags and items of clothing, according to the report, which cited a notice from China’s Ministry of Public Security. The seized goods were worth an estimated 1.8 billion yuan ($256 million) and included fake products resembling luxury brands such as Chanel, Hermès, and Louis Vuitton.

The main suspects were based in Dubai and operated two companies that contracted Chinese factories to make the products and then sold them to distributors in several Middle Eastern countries, according to the report.

Chinese authorities last year vowed to strengthen protections on intellectual property in a bid to rectify the country’s reputation for counterfeit goods. The Ministry of Public Security launched a special operation against such products in July, leading to the arrest of 6,197 suspects in just three months. Also last year, police in the eastern Anhui province destroyed 500,000 pairs of fake Converse and Vans sneakers worth 600 million yuan that were slated to be sold in the Middle East. (Image: Shanghai police) 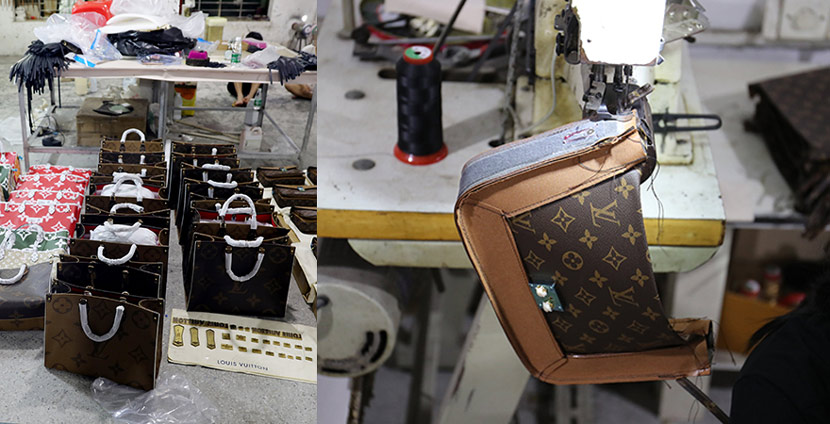 Thirty-four people were working in the coal mine in Pingyao, Shanxi province on Monday afternoon when the gas explosion occurred. Though 18 workers managed to escape, 16 were still trapped in the mine on Monday evening, according to CCTV.

Over 100 people reportedly died in 67 coal mining accidents nationwide in the first half of 2019. Around one-fifth of those deaths occurred in a single incident in the northwestern Shaanxi province in January. (Image: IC) 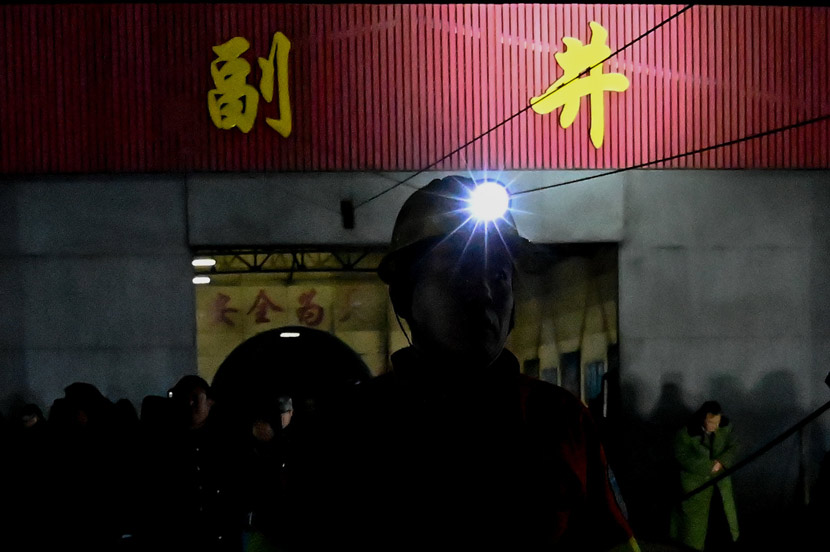